The Neuköllner Oper Kinder Klub (NOKK) is starting this time with old and new members aged 8 to 16 years.

After the meal in the school canteen the pupils* suddenly feel sick.
What happened?
Everyone investigates with – and against each other, who could have which motives.
Was it the cook, the food counter or the catering company? Are the technician and the guy from the cleaning company not related to each other? Why does the director’s wife show up at the director’s office? Has anyone seen his daughter and the twins from the parallel class? An avalanche of mutual suspicions is unleashed. As in big things, so in small – events are hastily hysterized and turned into pre-judgements
Or was it a coincidence – and our environment has more impact on our life and health than we think?!

2019:
The play HELD/IN?! was dedicated – like the musical Dragon Heart, which was running at the same time – to the question of whether these super guys still exist.

2018:
We took up a serious topic that “the greats” also dealt with in the regular programme (Wolfskinder). How is a world without parents? First an adventure and almost unlimited freedom, but then of course fear and loneliness. What could be done about it? Does joining a group help? And how should one decide where to go?

A group of 12 girls and boys met on six weekends on Saturdays and Sundays and, together with the director and drama teacher Verena Talamonti, developed the play ALONE, which was first presented to friends and relatives and then presented as part of the art and culture festival “48 Stunden Neukölln” on 24 June 2018.

2016:
On six weekend afternoons, under the expert guidance of Lajos Talamonti and Michael Kessler, the children invented music, movement and play for a play which they then presented on our stage: The Forest of Enchanted Children – a mini-magical as part of the art and culture festival “48 Stunden Neukölln”.

For further information please get in touch with
Andreas Altenhof
030/6889 0712 or info@neukoellneroper.de.

NOKK is kindly supported by

In the third year there are workshops aimed at refugees: In terms of content they deal with roles: Which images of the other are there in me or with the others, how can I playfully deal with them.

This form of encounter is currently being continued by supplementing the workshop format with public events with a cultural reference (music, literature, etc.) developed by the women working together in the workshops. These events take place in the rooms of the Neuköllner Oper. This project is led by the theatre pedagogues Kristina Roehl and Helena Klaßen.

In addition, a film entitled Berolina Hotel was produced about the everyday life of home residents in the IB Radickestraße temporary dormitory, the script of which was developed by Afghan filmmaker Ghafar Faizyar together with home residents*and staff*. The public film premiere took place on 3 November at the premises of the cooperation partner Alex-TV. The film can be seen here. 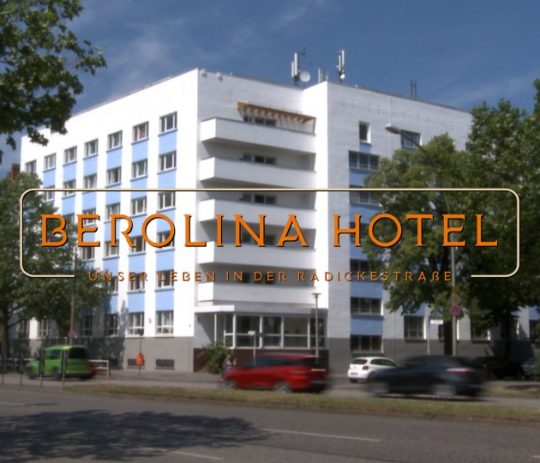