Founded in the summer of 2012, the Neuköllner Opera House’s “Young Ensemble” will develop its own music theatre productions around themes of current interest. With the musical quartet (directed by Tanja Schmitz), which they wrote and composed themselves, the project presented itself as Berlin’s first continuously working musical theatre formation on the stage of the Neuköllner Opera House in June 2013. 2014 followed under the direction of Lisa Brüning (until May 2014) and Nadine Boo’s white-dressed ugly children take a trip with performances in the Neuköllner Opera House, the Alte Feuerwache and the Festival Klubszene. This was followed by Odyssée d’Orléans – the d’Arc Knight Returns (2015) and Puccini Cappuccini (2016), both with texts by Felix Kracke and the ensemble and music by Michael Bellmann, directed by Nadine Boos, as well as: Mea Culpa Massaker, a piece developed by the Young Ensemble of the Neuköllner Opera with Felix Kracke (text), Yuval Halpern (music) and Nadine Boos (direction) (premiere 14.6. 2017), Orpheus Optimal, music theatre of the Young Ensemble of the Neuköllner Opera by Yuval Halpern (music), Felix Krakow (text), Bjørn de Wildt (direction), Gwendolyn Noltes (costume), Franziska Korte (production management) (invited to the Munich festival “Rampenlichter” and to the “Theatertreffen der Jugend”). 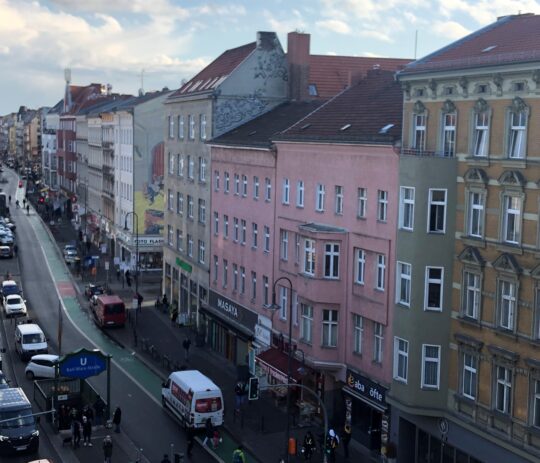 In four workshops on acting, music, dance & text, the streets of Neukölln will become the stage for young people from the neighborhood.  Between bridal fashions and arcades we let ourselves be inspired: We develop dance scenes, search for words, find sounds, create play scenes – and in the end we mix everything together. This is how a tour of the arts through Neukölln is created in record time!

Participation is free of charge, food & transportation included! If you do not have your own smartphone or laptop, we will be happy to provide you with one for participation in the workshops. Please let us know when you register if you can bring your own device or not!

Registration with name, date of birth, address and cell phone number
until 28.3.21 at the latest to the project leader Franziska Korte at:
jung@neukoellneroper.de

The Easter Exchange is a cooperation between the Neuköllner Oper, the Gemeinschaftshaus Gropiusstadt and the Helene-Nathan Library. The project is funded by the program “Kultur macht stark. Bündnisse für Bildung” of the Federal Ministry of Education and Research.

HOW TO CONTROL YOUR ANGER IN TEN EASY STEPS
A musical tutorial for all those who tend to losing it from time to time
The general wind becomes rougher and the sound sharper, the nerves lie bare. Not an easy time for those who are easily heated. But nobody is alone, don’t worry: Together we’ll get it under control!
World premiere on 27 October 2020.

HOW TO CONTROL YOUR ANGER IN QUARANTINE (Webseries)
The premiere of the stage play HOW TO CONTROL YOUR ANGER IN TEN EASY STEPS had to be postponed to a later date due to a pandemic, but the Junge Ensemble invited you into the digital spheres of anger management:
The 5-part web series had its premiere on Facebook on Friday, 22 May 2020 at 7 pm, including a live chat with the Young Ensemble.

For further information about the work of the Young Ensemble of the Neuköllner Operplease get in touch with
Andreas Altenhof
Phone: 030-6889 0712
altenhof(at)neukoellneroper.de.